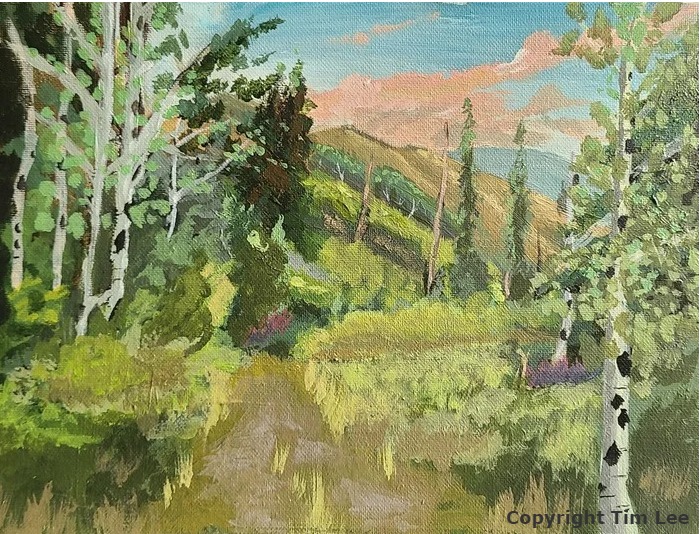 My wife and I had planned to go camping for a while and were anxious to use our trailer at least once in 2021 before the winter hit. The problem we were facing were all of the fires that had started early that year that are often seen during the summer. During that trip, I had one specific goal and that was to try “En Plein Air” for the first time. That basically translates to “Painting in nature”, or Painting in real life”. I had invested quite a bit of money in my first plein air box, in a bunch of small canvases, paints, brushes, and I was ready for war. But I couldn’t make up my mind if I was going to try oil paints, or acrylics to try for the first time. One thing I quickly realized would be that we would be in the middle of the Montana mountains. Civilization is probably an hour or two away, which means limited supplies. So things like water, for instance, need to be rationed carefully, and also things like discarded oil paints and turps that let off quite a smell could attract animals like bears and mountain lions. In Montana that is a real hazard and needs to be carefully considered. When you go camping, you are in their territory, so you play by their rules. So the more I considered the more I found myself drawn to acrylics as my source of painting medium. It would be less invasive, easy to clean with small amounts of water, didn’t require any other mediums to work with, and would force me to learn the medium since that would be all I had with me.  So we packed up our bags and headed into the beautiful Montana wilderness to a controlled campground that at that time had only stage 1 fire restrictions, which would allow us to have a fire as long as it was within a controlled firepit.

Getting there for the first time we weren’t very impressed with the campground, and smoke filled the air from other areas around Montana dealing with the forest fires that were several hundred miles away in multiple directions. So our choices were very limited, and it was between staying there, or driving home to Covid infested Great Falls and feeling the pressures we were attempting to escape. So we found a spot that allowed our dog Zoe to run around freely without bothering any other campers and set up shop.

The views weren’t great where we were. Tucked into a ravine of multiple mountains around us, but directly outside the door of our camper was an expanse of open space surrounded by trees. You could see a natural path where either hikers or animals had warn away the ground and it opened to a small vista of two mountains showing gently out of the smoke and smog. It was obvious to me that this would be the painting I would end up doing. I wondered how long it would take me to complete it.

My first attempt of starting to paint of my small canvas didn’t turn out very well because it immediately started to rain. In all honesty, the rain was a small price to pay. We were facing a drought that continued to fan the fires. Any rain was a positive sight to see and offered the firefighters a little relief.  So I grabbed my gear and tucked everything away back into the trailer and enjoyed the sound of the rain on the metal roof of what we lovingly call “Dobby the Hobbit House”. It didn’t take long for the rain to die away and to get set back up, get the camera recording, and get back to work on what I hoped would be an hour, two hour long painting. I had no idea what I was in for, but I was enjoying every minute of it and the hours would quickly pass by as I found myself learning new techniques, getting slightly frustrated, painting over it, and just keep layering layer over layer. By the time the sun was going down I found myself annoyed, but also impressed with how little I had completed, but how much knowledge I had gained. I was determined on day two to put it all to work and get the painting to its finish. I found myself constantly defaulting to adding more blue to the skies and to hide the smoke on the horizon even though I really wanted to capture the smoke on the hills and try to capture that moment that Montana was experiencing in a whole. A fire in the lower 48 makes news… For Montana, this is yearly, so though its just as intense and makes people escape for their lives every year. It isn’t covered by the news. So my initial plan was to make a painting showing that smoke. But like I said, default kept kicking in and other things began to inspire in different directions.  I also learned how to kill bugs with an electric fly swatter. Highly suggest getting one if you are going to paint in the middle of the Montana mountains.  It was very humbling to have someone come up from another camp site and complement me on the painting so far, but I didn’t dare tell her I had been painting for a half a day already to get to that very slight bit of progress.

That evening as the sun went down the skies filled with some beautiful clouds filled with the highlight of the sun. It immediately changed my opinion of what I wanted to create, not to mention painting all day, I was capturing the day as the sun moved and I watched my painting change with it every time the shadows moved. But as I saw those clouds I fearfully made the jump and painted them in with a pink hoping to top it with yellow and white to bring out the highlights. I admit it is still one of my favorite parts of this painting.

On a side note, as I come back and watch these videos over again and remember these details it makes me want to try that palette knife technique again that I was doing. Just using the tip of the palette knife that I shaved down with a router. Makes me want to rush home and paint a bit more.

On day two I was itchy to get back to my painting. I felt I had built a solid background and it was time to move forward on the details in the mid ground. The sun was shining a lot brighter that morning and the shadows seemed a bit stronger causing one of the trees on the right to dip into deep greens and blacks. I found myself constantly saying, “too saturated” and trying to muddy up my colors so everything wasn’t as vibrant.  I have spent a lot of years painting in digital with extremely vibrant colors, rarely stepping into other tones and being truly oblivious of the true range and depth that is out there in the world. Painting with real paints in a real life scenario seems to force you to take note of those tones and saturations, which in the past always baffled me. I feel like I am just starting to understand the theory behind them now, and it makes me ready to dig in deeper with painting to help improve my digital work as well as my real work.

Day three, I never expected that a plein air study would take me days on location instead of hours. But what an awesome experience.  I struggled heavily with the path that was in front of me on this day. Making it show too clearly instead of it looking more like a warn path within the natural land scape. I found myself painting it over and over again. I also struggled to separate the mid ground from the background and found the brush and cover turning into a mash of colors and tried to offer some separation with some small blasts of natural purple flowers. I found even though I began to understand the tones and saturations a bit more, I still leaned too heavily into the saturations and time would be the only way to press myself away from it. But as I painted on this day, I found myself connecting more with the paint, and found the consistency that I liked working in, where painting with my brush didn’t feel like I was using washes, but solid blocks of color that could be gently blended in with the surrounding colors.  It reminded me as a kid working with cheap pancake watercolors and hating how it always stayed watery because I didnt understand how to use very little water and more pigment. In the same way I found myself connecting with the acrylic and realizing I had been over diluting the paint with water or slow dry medium. Once that clicked it really opened my eyes and sent me on the path to completing my piece. I often call those moments “Ah Hah” moments where God flips that switch in your brain and it suddenly all makes sense. Once that happened I was able to finish my painting and feel for my first attempt and three days of study and putting my theories to practice, I actually was able to achieve a worthy outcome. That painting hangs up in my office at work proudly now and I hope very soon to get out in the woods again and do another plein air painting. Hopefully within an afternoon instead of three days, because of the time invested in the techniques I learned. I hope you get to experience a moment like this in your life as well, and if not. Please feel free to live vicariously through my art and videos. Thanks so much for coming to my website and reading this account for yourself.

So excited to get my "Grand Tetons" painting all f

Great Falls/Helena artists, want to do some plein

With every pro comes cons. My F3 is having some pr

There is something so incredibly beautiful of a wo

My latest work in progress :0)

This weekend has been rather intense, yesterday mo

The hand of a happy painter.

I'm really excited about this one... I started wit

So yeah this whole traditional painting thing is g

Here's the next painting available for purchase on

Ok! Technically this is my first official painting

Ok my first Buffalo in black and white. I plan to

Working on some thumbnails for a few smaller paint

More progress on one of my paintings!

Oh Jersey Mike's I missed you so! Finally in Great

Figured I would share this one before it undergoes